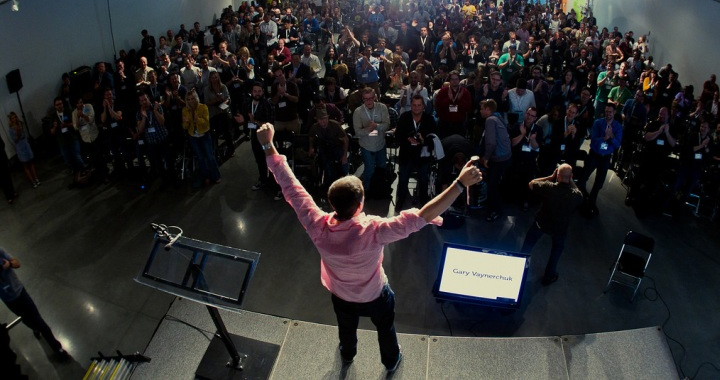 What is micro content in the first place? It’s a fairly straightforward concept, but its implications are massive. What truly defines micro content is that it’s small and easy to digest, with powerful macro-level impact. Micro content can be identified by 3 characteristics: low cost, short lifespan, and fast distribution.

Basically, it’s the bite-sized bits of media for the modern era.

The mechanisms behind how we consume content have vastly changed. Endlessly scrolling through a social media newsfeed until we get bored is nothing like sitting on a couch watching television flipping through channels. In 2013, Gary told TechCrunch, “Storytelling is changing, and unless brands know how to tell theirs in a quick, witty and purposeful way that is native to these new platforms, they will be left behind.” That’s the straightforward reality of the way we browse the internet. Without adapting to the current climate, you’ve already lost.

Shifting the Art of Storytelling

The way you tell a story on every individual social network is very different from each other. Learn to understanding what kinds of pictures will get the engagement you’re seeking. “Figure out how to natively storytell on the social networks that matter,” Gary said in an interview with Ernest Barbaric. You’ll realize it looks very different on Pinterest compared to Instagram. This interview was 5 years ago and Gary foretold that he’d still be talking about the micro content revolution in 2017. And guess what? He still is. Interview after interview, the micro content revolution is still a hot topic.

Simply put: He repurposes old content and reformats it to perform optimally for each platform he touches.

This mentality is applied to every piece of business Gary touches. He has an almost ethereal presence online because of this. It’s not just keynote speeches. His text format tweets that perform well? Those become images for visually-focused social networks. When Gary is speaking on stage or the #AskGaryVee Show and people react positively, he thinks to himself, “I should tweet this later.” And then he does.

For anything you put your effort into, try to think about how you can further leverage it to your advantage. Apply this mentality first to your content and then it will seep its way into every aspect of your business.

Let’s use promotion of this blog article for example. Upon publishing, it’s become instinctive to us to distribute to platforms we’re active on:

1. Facebook: We’d post an image with a short caption or quote and a link to the article.

2. Twitter: We’d schedule tweets across a period of two weeks with a variety of formats. The Twitter feed moves fast and even devout followers won’t see everything posted. Images, gifs and text-only tweets appeal to different audiences, so we use all

Social media is a swiftly changing landscape. The way you tell your brand’s story needs to adapt quickly to be successful. But that doesn’t mean you need to exhaust your time and resources building content for every platform. Work smarter, not harder. Take your best work and reformat it for other platforms.

Get tips delivered to your inbox.

Get started with a free trial today!

Your first 30 days with Workpapers is on us.